He who overcomes shall inherit all things, and I will be his God and he shall be My son. (Revelation 21:7 NKJV)

These promises made to overcomers are absolutely, positively marvelous. 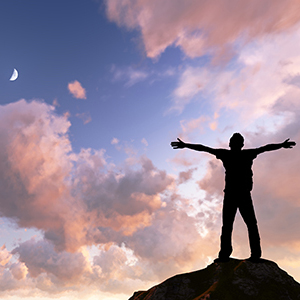 Sometimes we want to ride through our lives on a pink cloud and play a harp—with nothing to overcome.

But we are not in kindergarten; we are in a battle. Battles take weapons, endurance, and guts. God wants His people to have spiritual guts. With His Word in us, we can overcome wrong mental attitudes, bad habits, and any defeat.

Years ago, God told me to be an overcomer in one area of my life. I thought, “God, I can’t do it.” This area had been a stumbling block for so long that I was blind to it. But the Lord sweetly said, “I’m not asking YOU alone to overcome, I am asking you to release Jesus to be the Overcomer in you. You have a new nature—an overcoming nature.” I then made the decision to allow His nature to take over in my life. Too often we are “undercomers” and will never surmount that which God would set before us.

We thank You today we’re not defeated Christians—we’re victorious Christians. We are Christians who overcome in all things. We are more than conquerors,