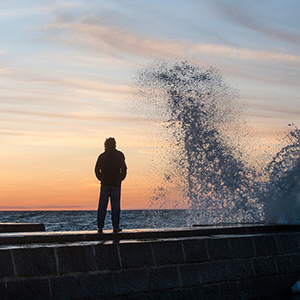 Jonathan said to David, “Go in peace, for we have sworn friendship with each other in the name of the Lord…” – (I Samuel 20:42)

As part of the inner circle of the king’s court, David was yoked to King Saul.  As Saul’s son, Jonathan was yoked to his father as well.  But David and Jonathan had a special friendship.  When it became obvious that Saul was jealous of the favor David had with the Lord, the two friends made a covenant with each other—to do the will of God in each other’s lives, regardless of what King Saul might say or do.

It was feast time, and normally David sat down and ate these feast meals with Saul and Jonathan.  But for two days, David’s place was empty.  Saul asked his son about David’s absence, and when Jonathan told him that David had requested permission to be with his family in Bethlehem, Saul recognized that Jonathan had put himself in an alliance with David.  Saul was so angry he threw a javelin at Jonathan—he tried to kill his own son and desired heir!

Was David still under God’s anointing to be king of Israel one day?  Absolutely.  Was David allowed to prepare to become king in the logical place of preparation, the king’s court?  No.  Was David set free from the yoke of being part of King Saul’s close inner circle?  Yes.

Was this difficult?  Very.  It meant that David would spend the next years of his life on the run.  It meant He would face challenges and situations he had never dreamed of facing.  But did this yoke need to be broken so that David could grow in his trust of the Lord and in his understanding about how to lead men into peace and not just into battle?  Absolutely!

Jesus, I declare that I trust wherever You have placed me is where You want me to be!