This author has not yet filled in any details.
So far Web Editor2 has created 11 blog entries.

On Sunday, travelers toured the storehouses of Joseph and loved it. Some travelers played tourist and shopped at stores near the hotel. You know how it is when you have to have a hieroglyphic T-shirt to take home.

The farewell dinner was a splendor of color as travelers arrived dressed in their best. Several ladies wore Egyptian headdresses, bands of gold and glimmering beads.  There was no lack of cuisine choices. Everything from a Greek salad to a turkey carving station.

Marilyn thanked her travelers and told them they were absolutely the best travelers she’s ever had and encouraged all to join her on the Spring 2020 trip.  It was a beautiful end to a marvelous adventure. 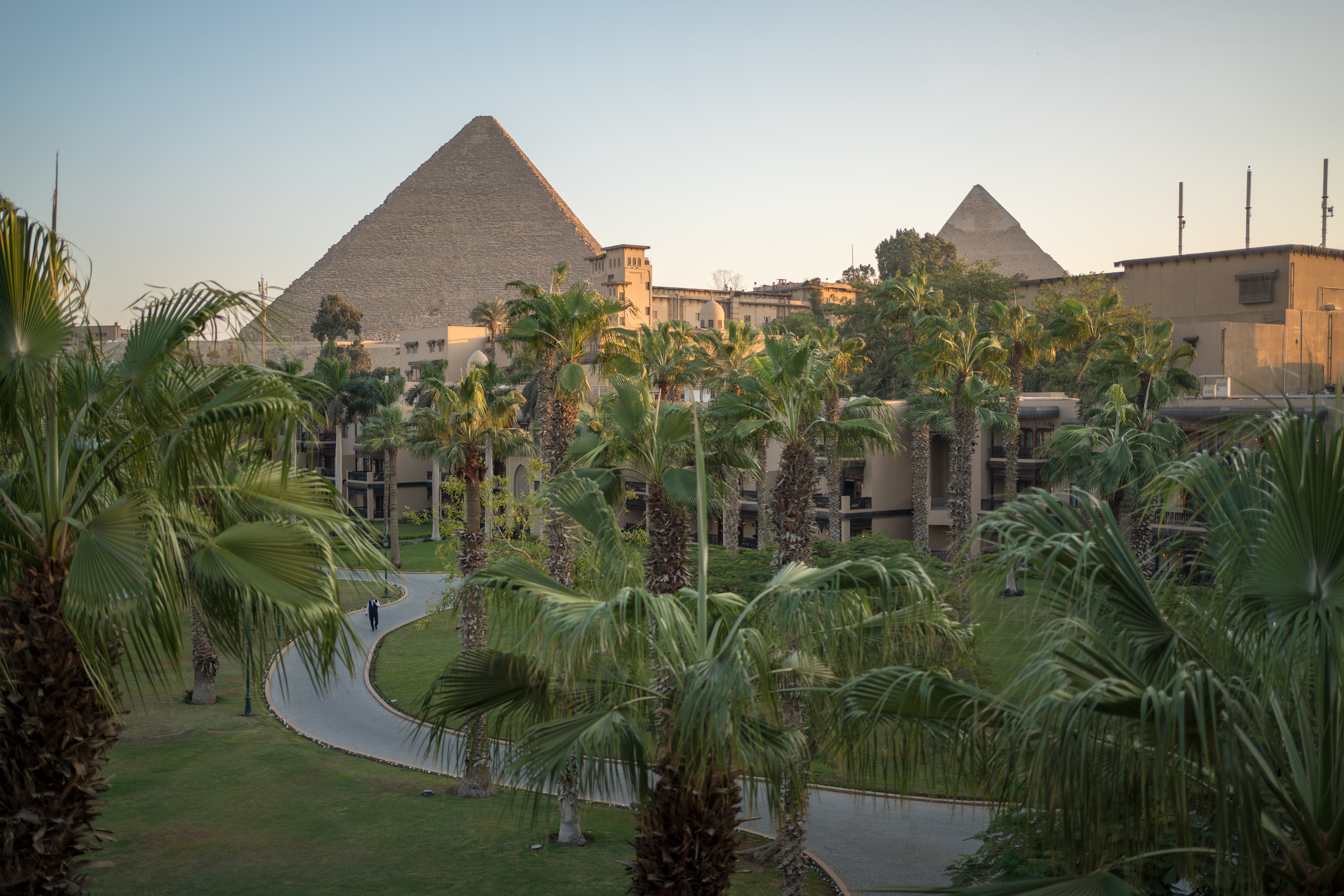 The morning opened with breakfast followed by a private time for worship and prayer with the travelers, Marilyn, and Sarah.

Once again, Marilyn and Sarah conducted a groundbreaking Ministry Training School and because of Marilyn Hickey Ministries, 600 pastors were able to come together and inspire each other to continue on in the good fight.  Pastors came together in one accord mending past hurts and encouraging each other.  One evening, the pastors stayed up until midnight worshiping the Lord and thanking God for what He has done. A meeting like this has never occurred before in Egypt, and it was truly remarkable.

There was a secular television crew interviewed Marilyn and Sarah and the story ran on the evening news.

Marilyn and the travelers were treated to a special lunch. They were touched by the gracious hospitality of the Egyptian Christians. 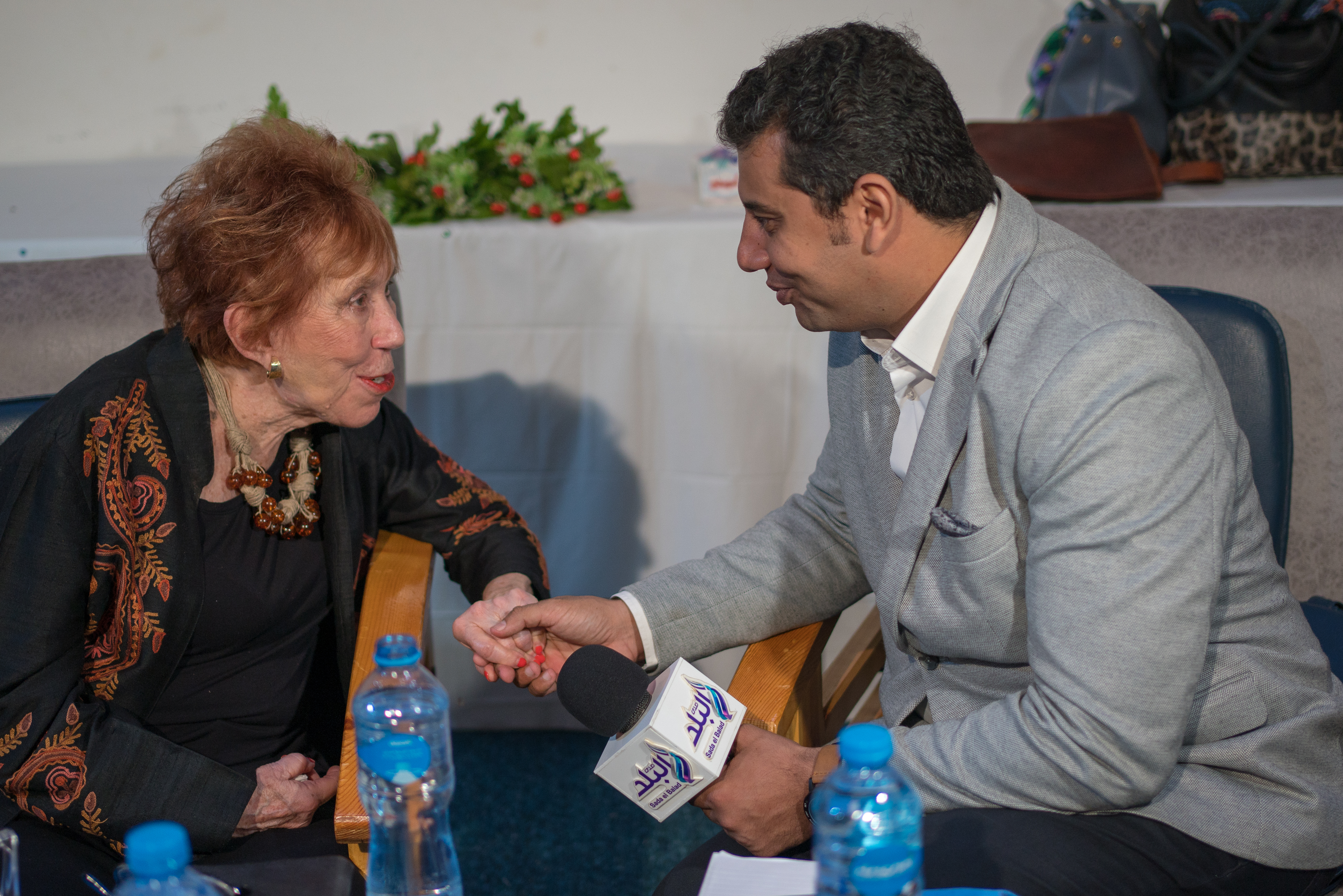 On Friday, Marilyn and Sarah were busy with the first day of the training school with 600 pastors and leaders. Those attending were from Ethiopia, Sudan, Eritrea, and Egypt. Tying in the conference message of unity, Sarah spoke and encouraged continual unity and taught the story of David and how he moved within his anointing, not Saul’s. She gave out several Words of Knowledge. Pastors soaked it up and were moved by the message. Marilyn taught on the motive gifts out of Romans 12 and how pastors and leaders are able to recognize the gifting in others.

The travelers spent some time with Marilyn before they boarded their busses for the three-hour drive to Alexandria, north of Cairo. Alexandria was impressive in architecture and history. The hotel travelers stayed in thrilled everyone with views of the Giza pyramids.

Despite Julius Caesar burning down the Library of Alexandria in 47 BC when he was fighting Pompeii, there are 4000,000 books in 33 languages today. It’s all preserved on the internet now. A lot of thought was put into the design of the current building, one example is that ceiling windows are in the shape of eyes with eyelids and lashed. Each design served a purpose as well as colors that were used. All were chosen to enhance the reading experience. The group also visited Alexandria’s lighthouse, long destroyed by earthquakes. Fortress in same location are known as one of the ancient seven wonders of the world. 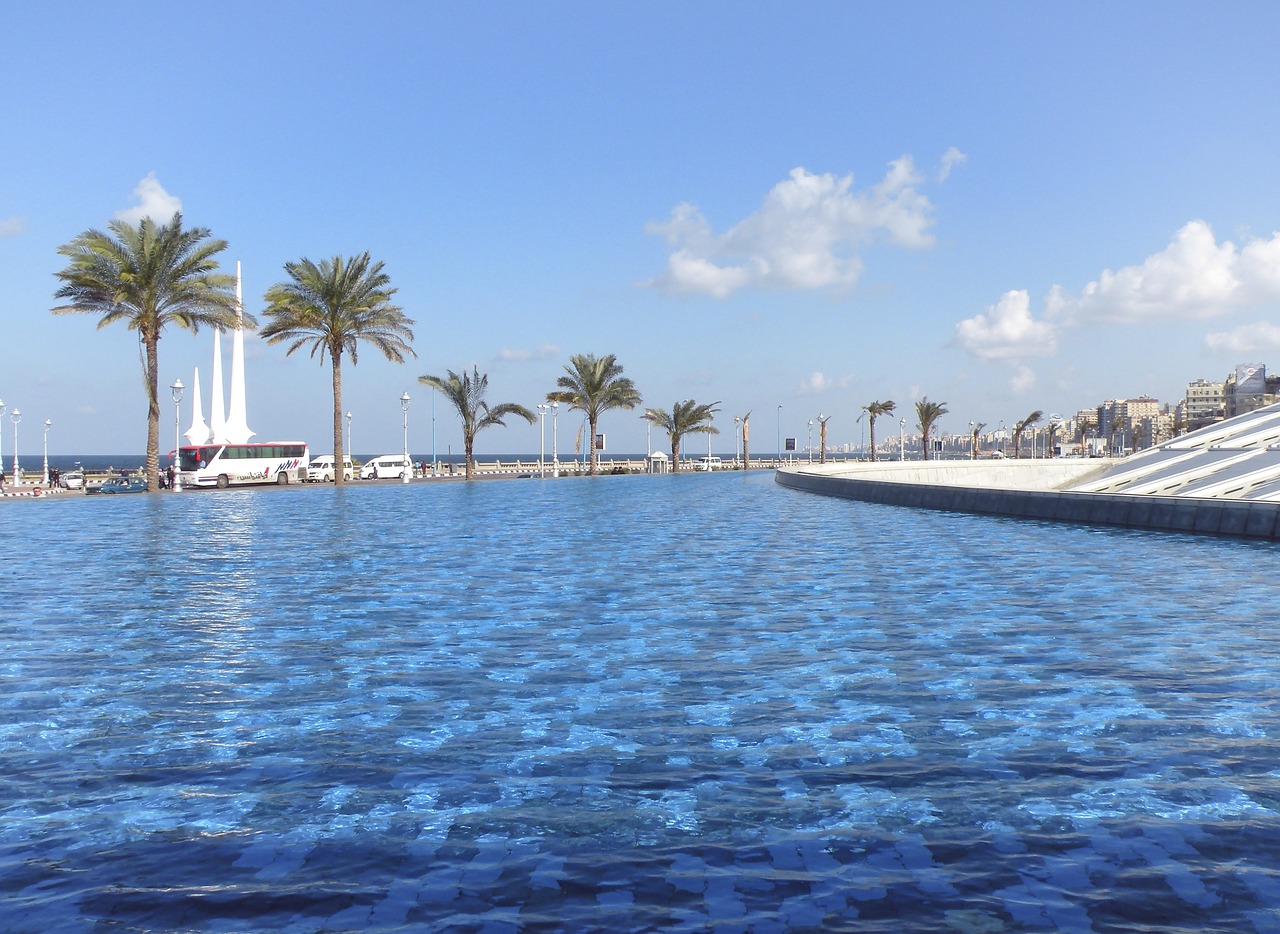 After an early wake-up call, travelers checked out the ship hotel in Luxor and boarded busses to make the trek to Valley of the Kings. The tombs were colorful with lots of detailed hieroglyphics. Everyone was impressed that it took many people to build it, over their lifetimes and the life of the king, all for glory of their deaths. In all, there are 63 royal tombs in that location.

The biggest highlight was the bus ride to Luxor, which crossed the ‘magical line.’ On one side of the road is fertile and green, and the other side is desert.

They also visited the temple of Pharaoh Hatshepsut. The second female pharaoh of three total, she is known for her infrastructure and building projects. By her choice, she is portrayed as a male in monuments. But if you look closely at them, they are softer in facial features.

Karnak temple, built for their gods, Amun, But, and Khonsu in 2000BC, was a monstrosity in its time, and perhaps ours. It was interesting because it is thought that Moses went to school here when he was trained up in Egypt

That evening, the group flew back to Cairo. 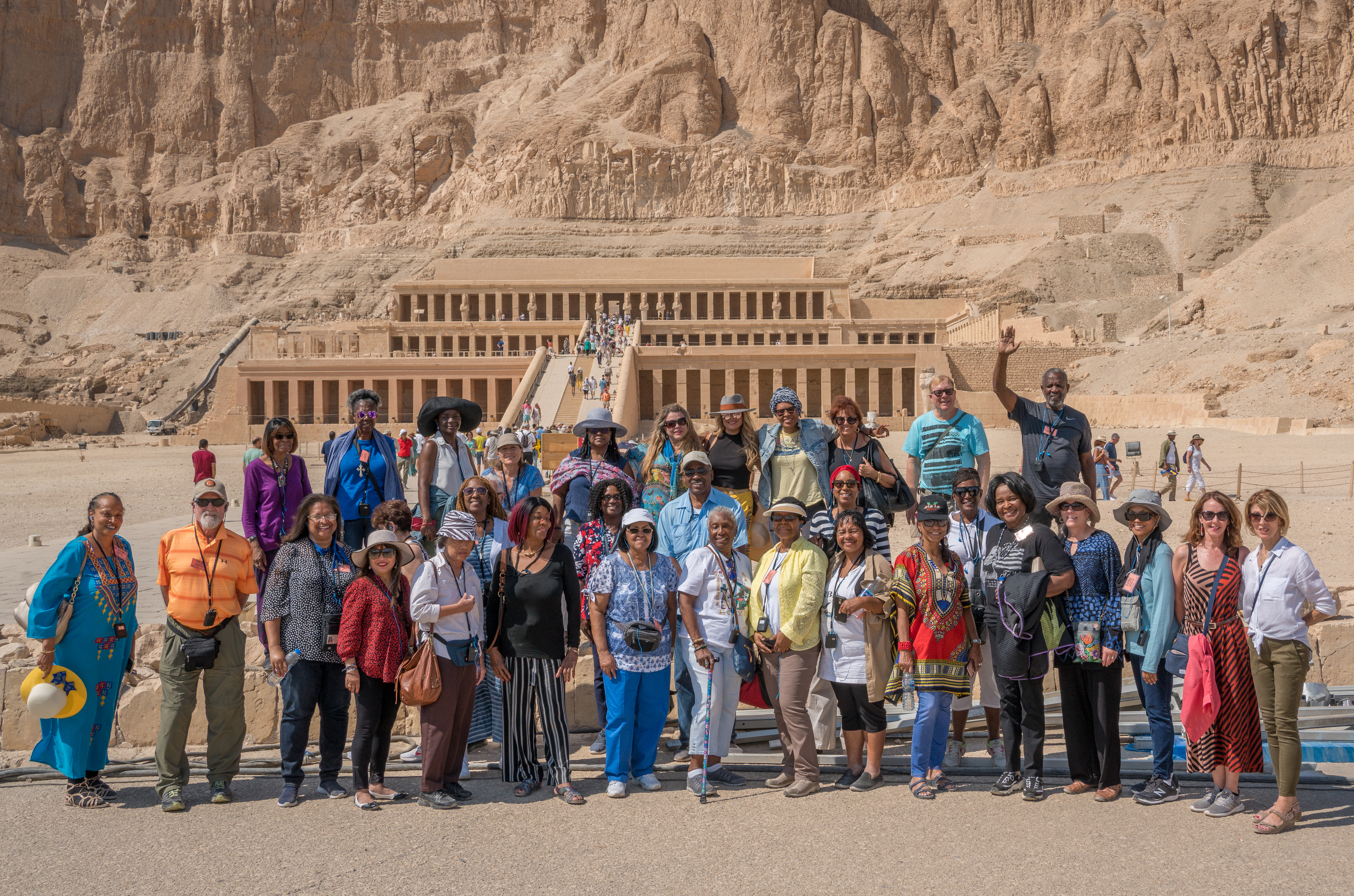 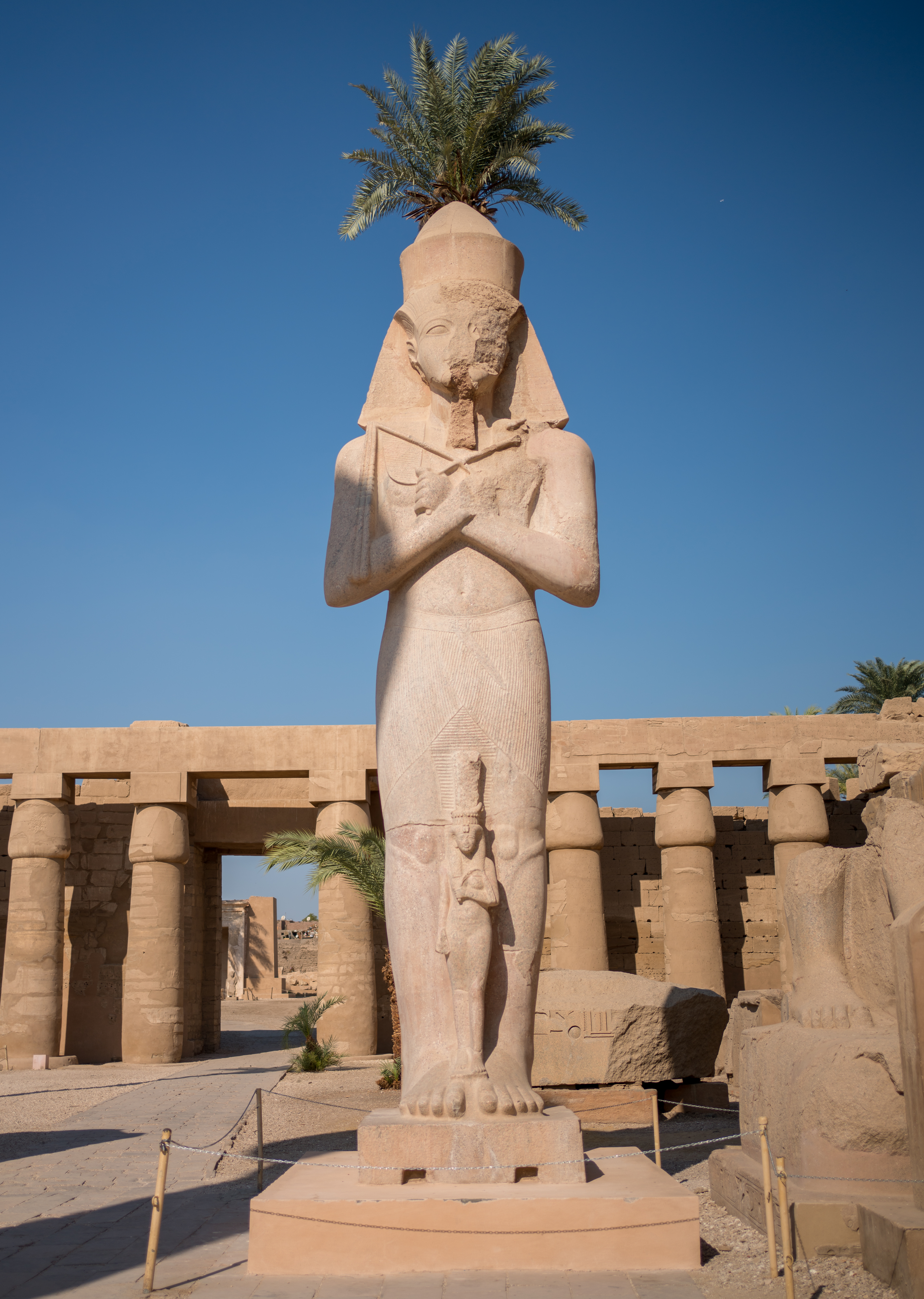 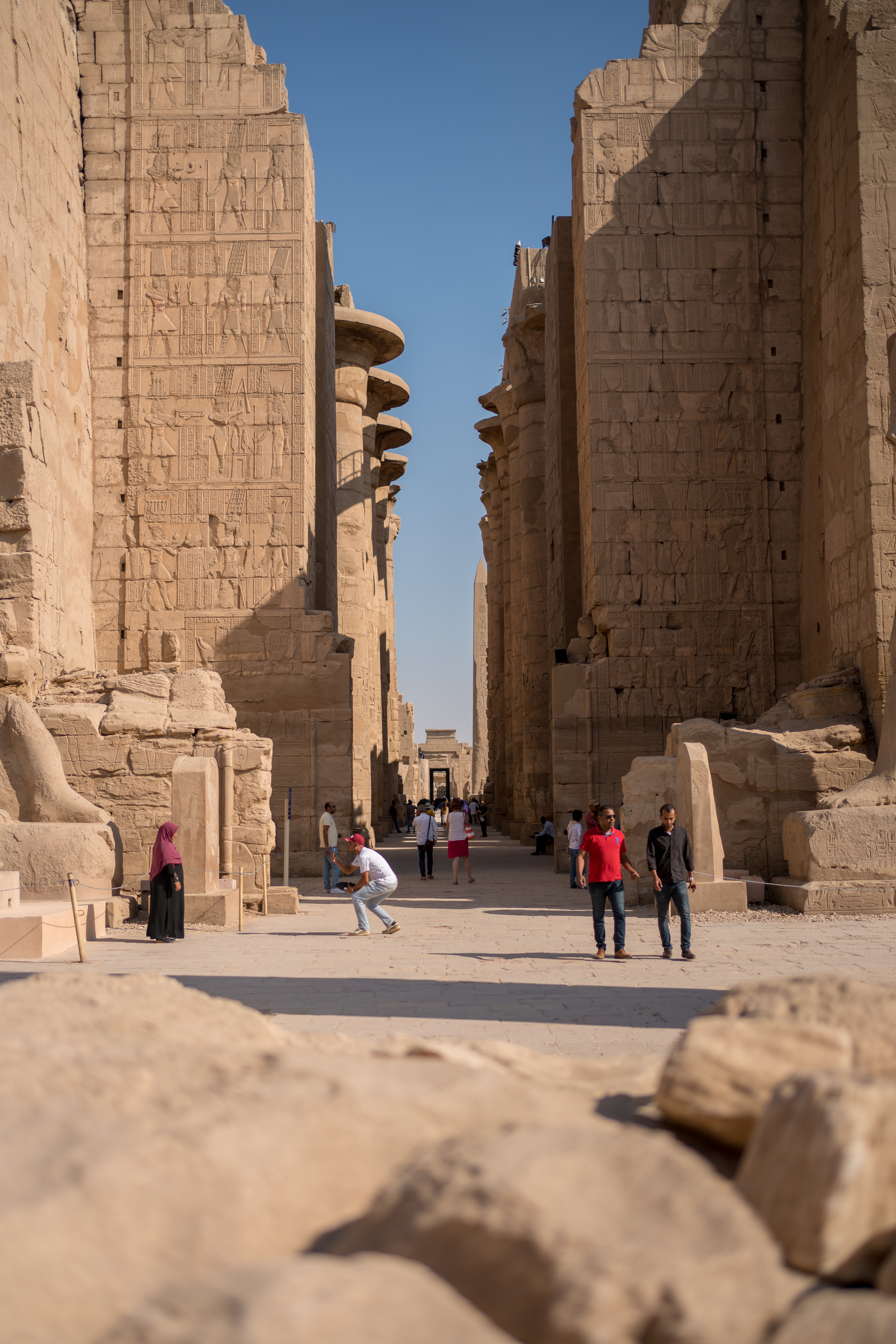 Wednesday morning Marilyn greeted travelers in the ship’s lounge then remained on the ship and had tea with the ship’s manager and visited with the travelers who chose not to go out on the day’s tour.

This was the last night of the cruise, and the ship’s staff danced and sang and served a lovely cake that said “goodbye.” It was the perfect ending to a lovely few days. 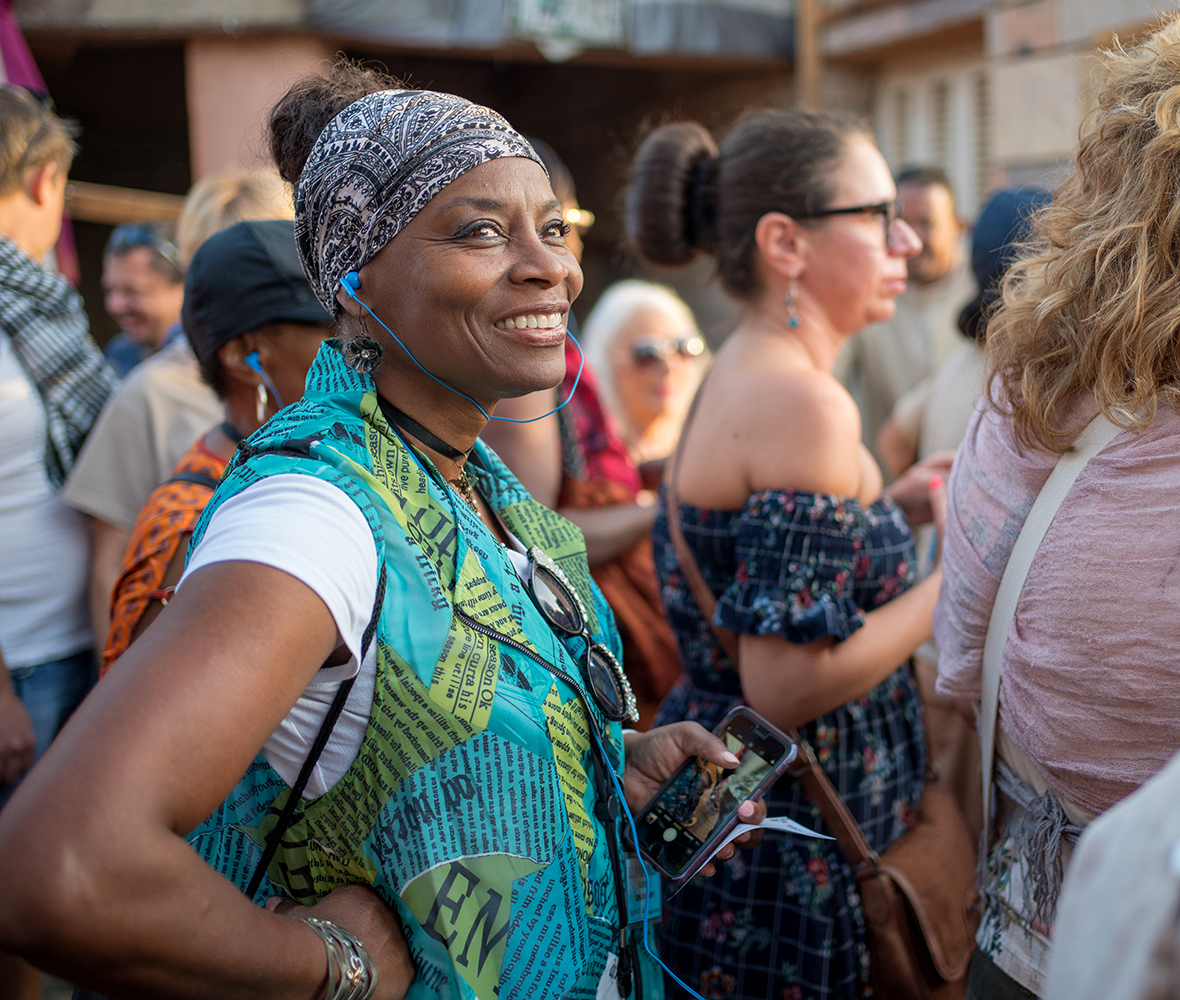 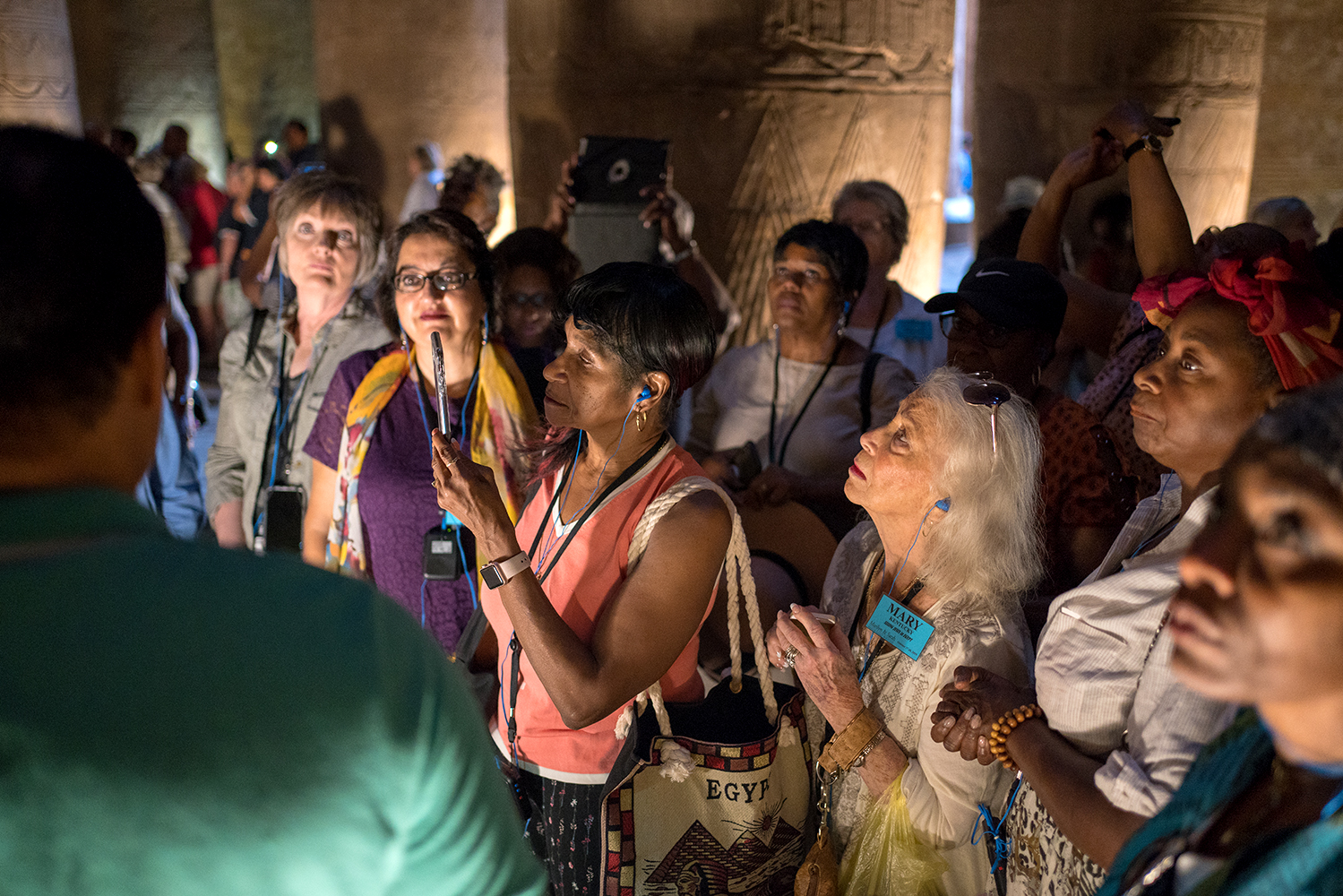 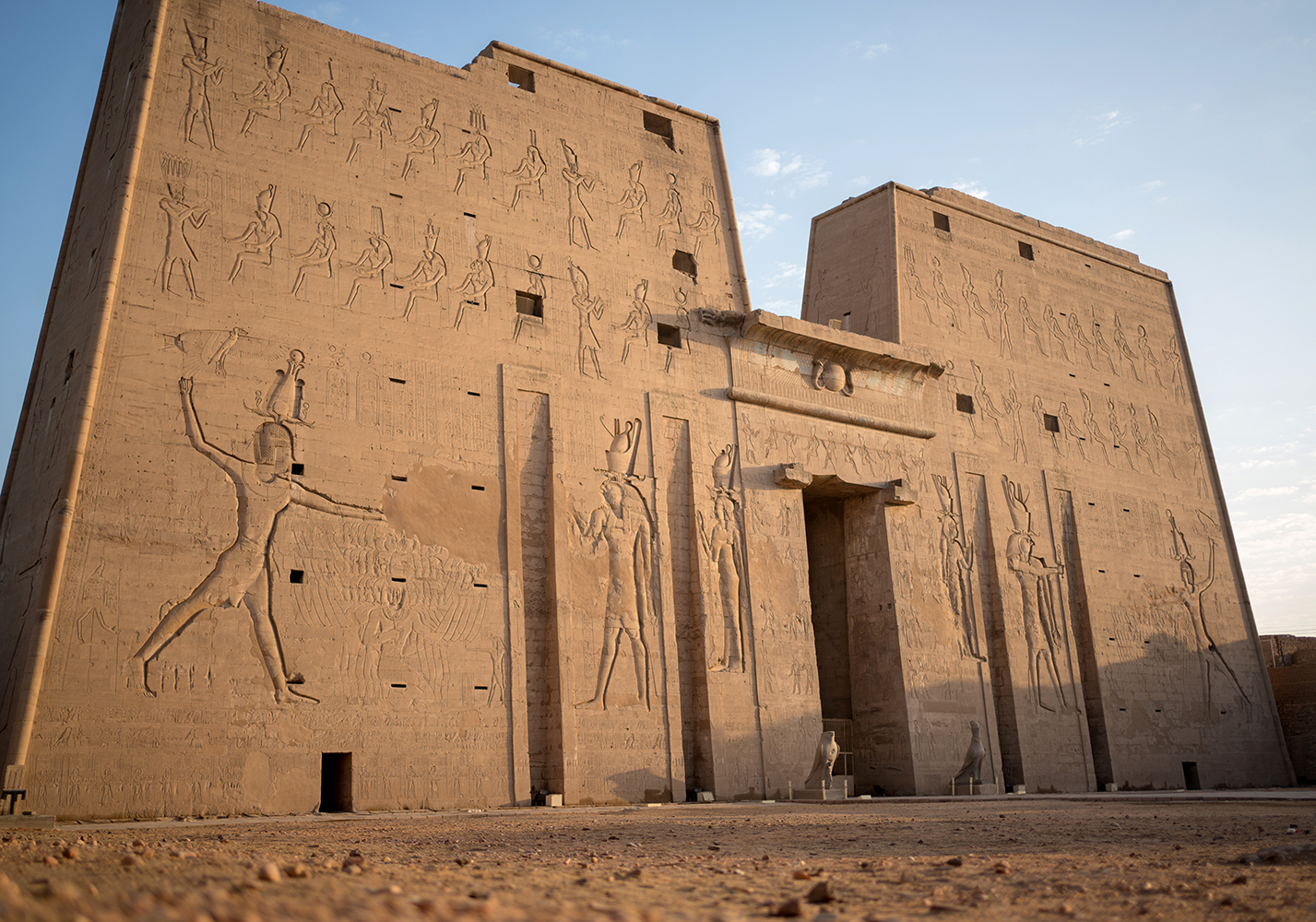 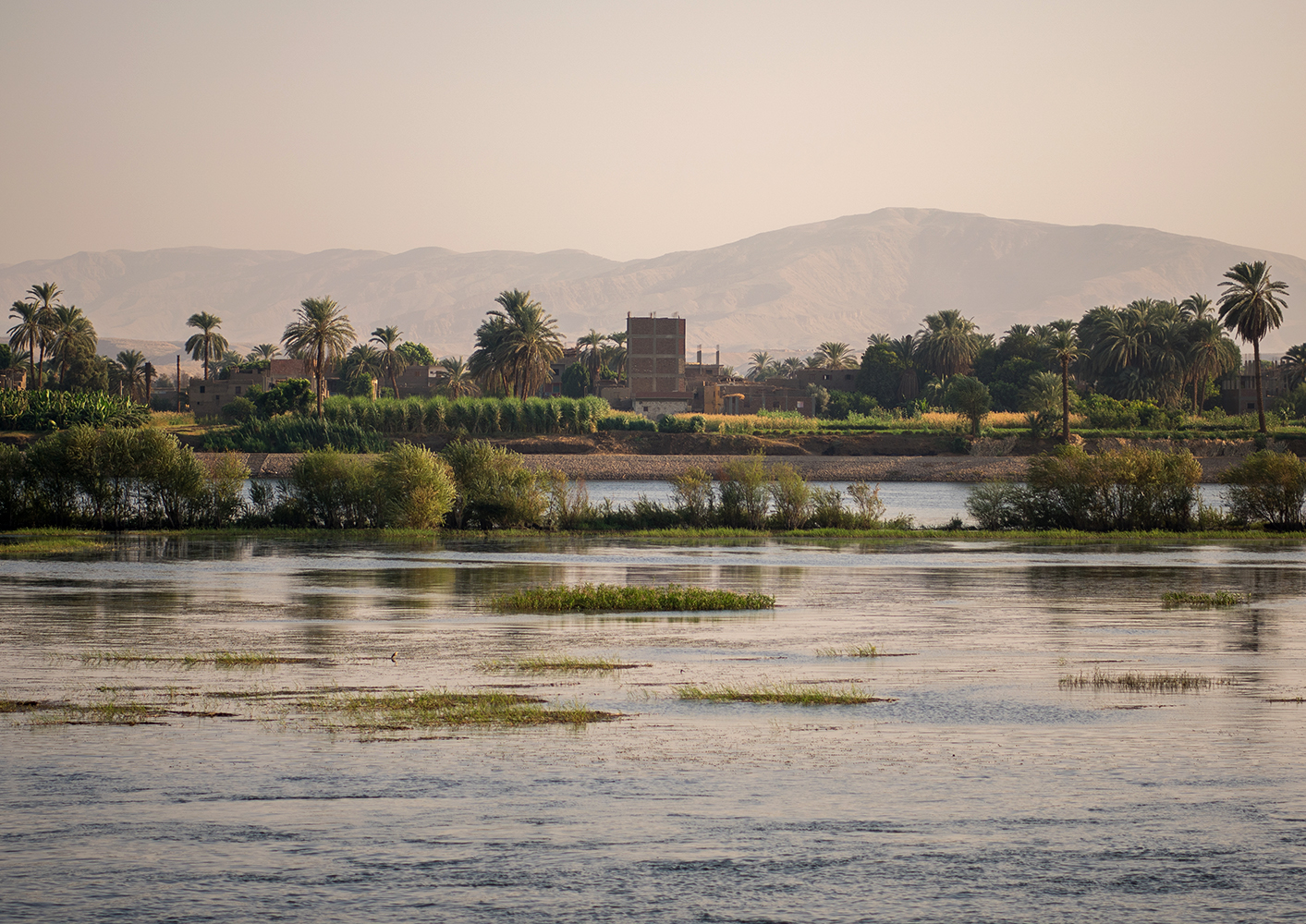 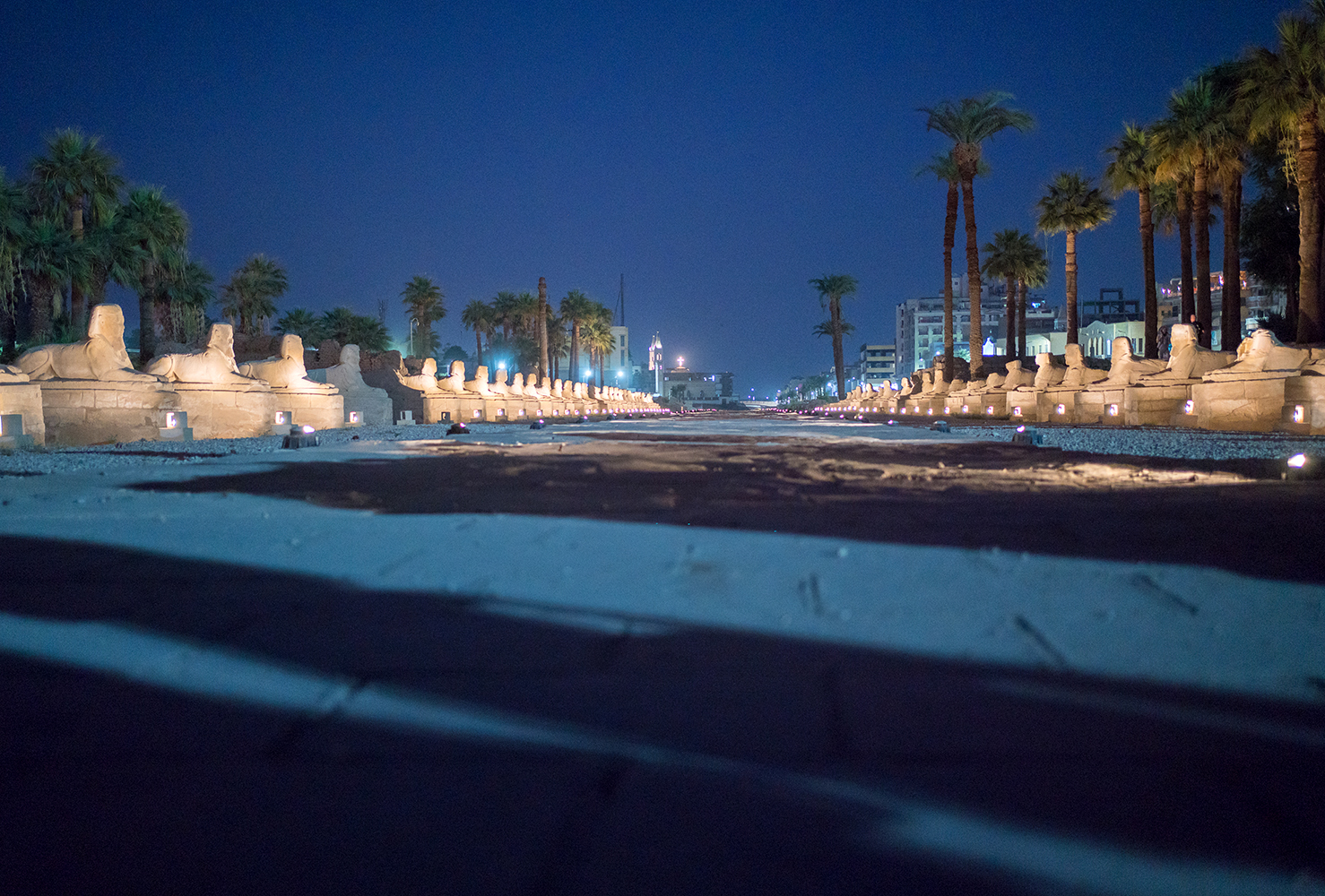 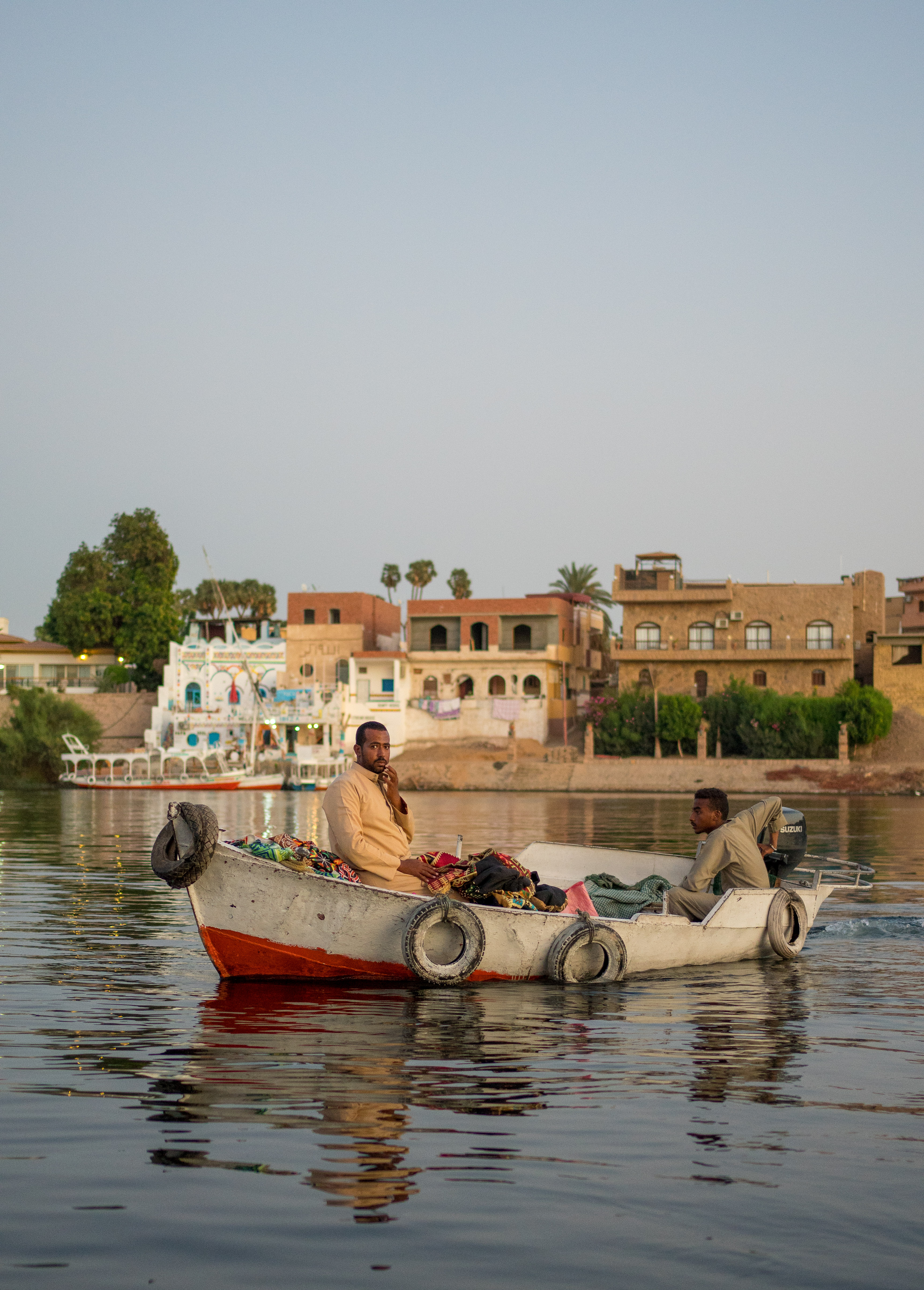 Tuesday morning, everyone gathered after breakfast for fellowship, praise and worship, and to hear a word from Marilyn. She taught out of Job 3:7-9 about how the Bible gives us examples of how to succeed and not give up. That afternoon the ship set sail, and the group enjoyed floating leisurely on the calm waters of the Nile.

They loved the view of the river banked by papyrus reeds, with a handful of goats here and there, and an occasional crocodile.The experience sparked imaginations to ancient times when the Nile served as a means of transporting the pharaohs and Cleopatra and from it, Moses was drawn. The ship stopped briefly at Kom Ombo, an agricultural town in Egypt famous for its temple. After a walking tour, everyone set sail again to Edfu where they docked for the night.

On Sunday, Marilyn spoke at Sharabia Church. The group attended and were allowed to pray in the lobby and outside of the church.

Later, everyone took a tour of Old Cairo.

Travelers arrived in Aswan Monday morning and found the city to be very different than the metropolis of Cairo. Aswan a large village situated amongst rolling hills with the Nile cutting a line down its center. Travelers toured a local temple then went to the ship to check in and freshen up for a special tour.

They all boarded felucca boats on the Nile, and as the evening breeze brushed their faces, they watched as the sun whisper goodnight and settled down into the sand. That’s what you call a sunset. Later, the travelers joined Marilyn for dinner at the hotel. 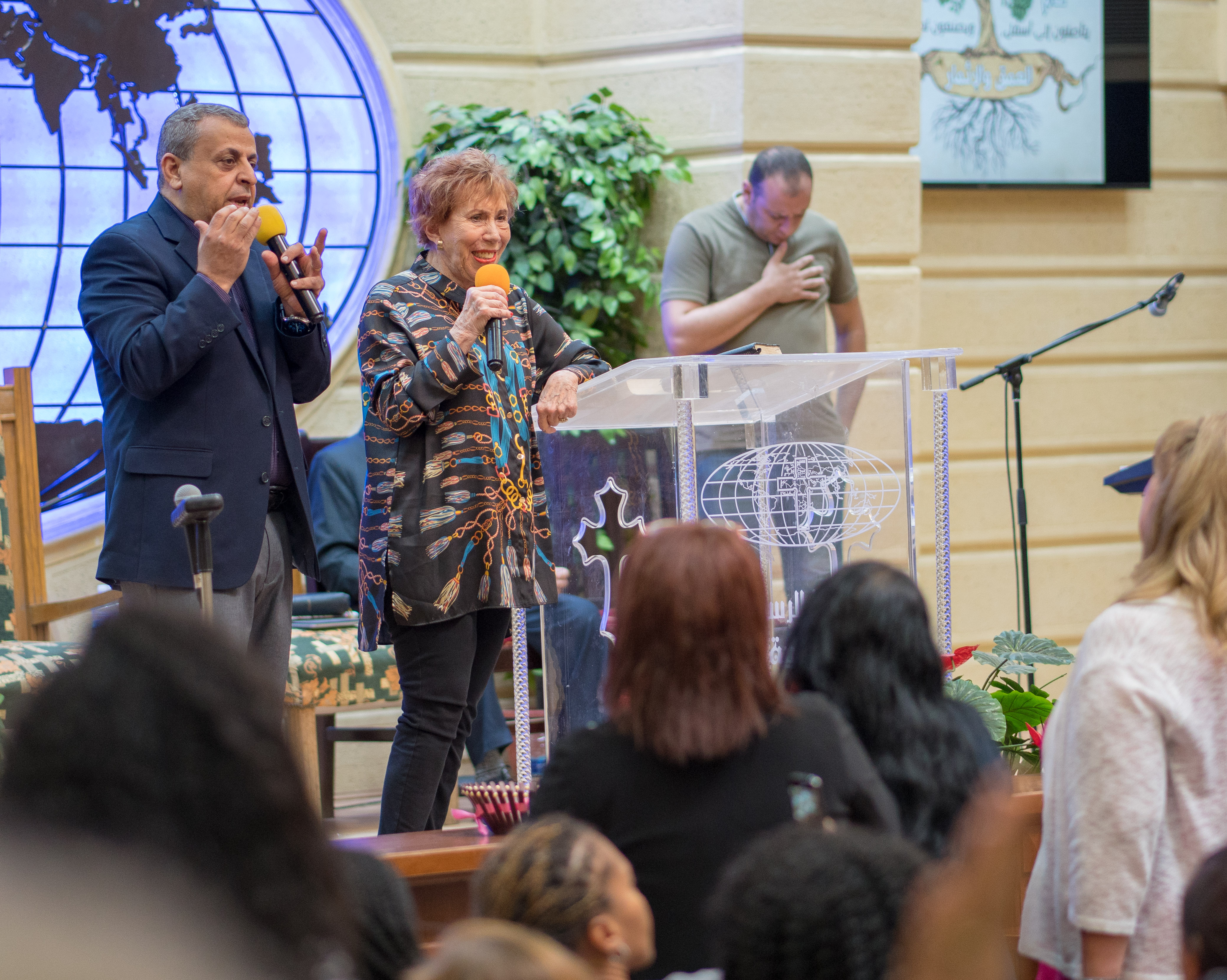 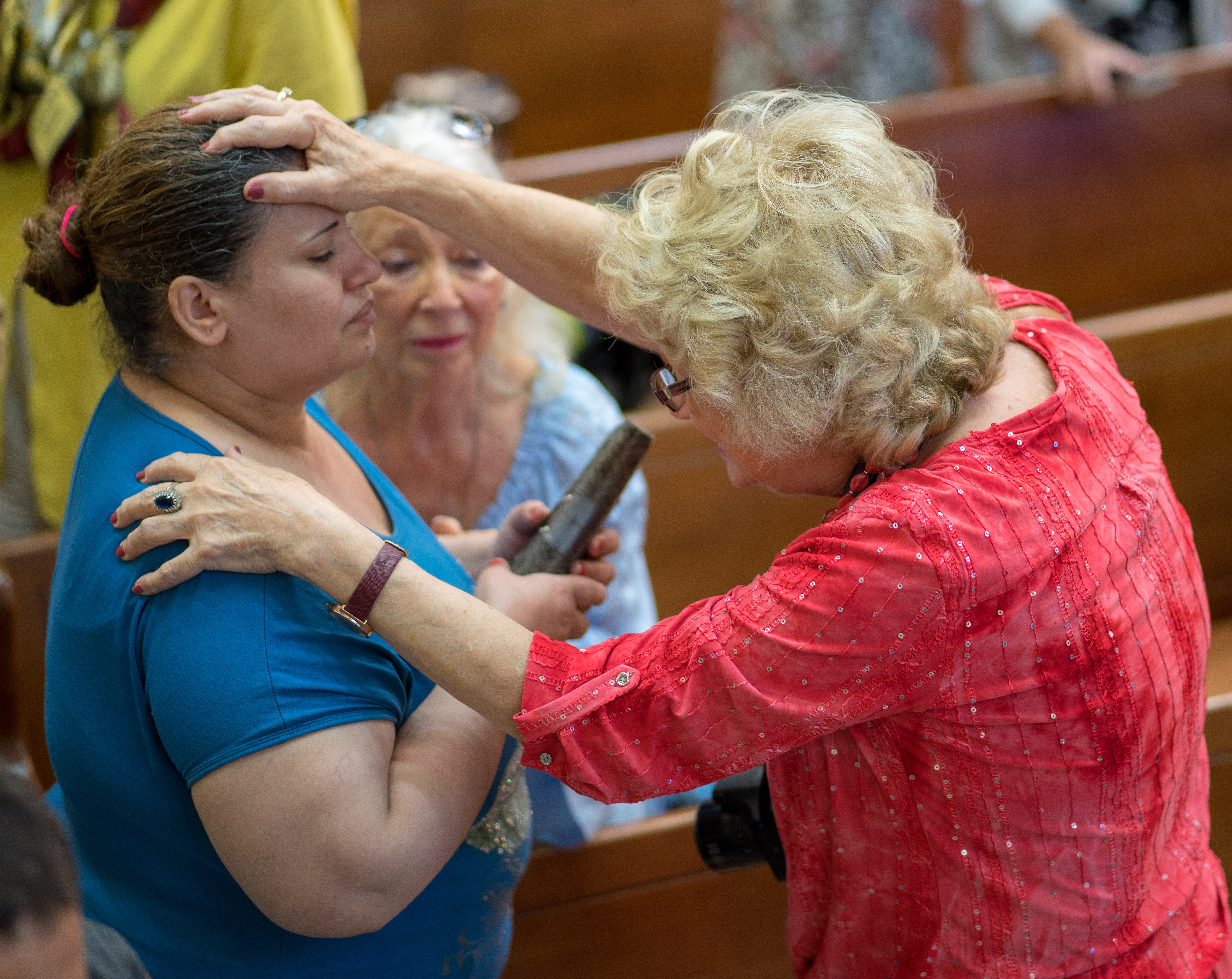 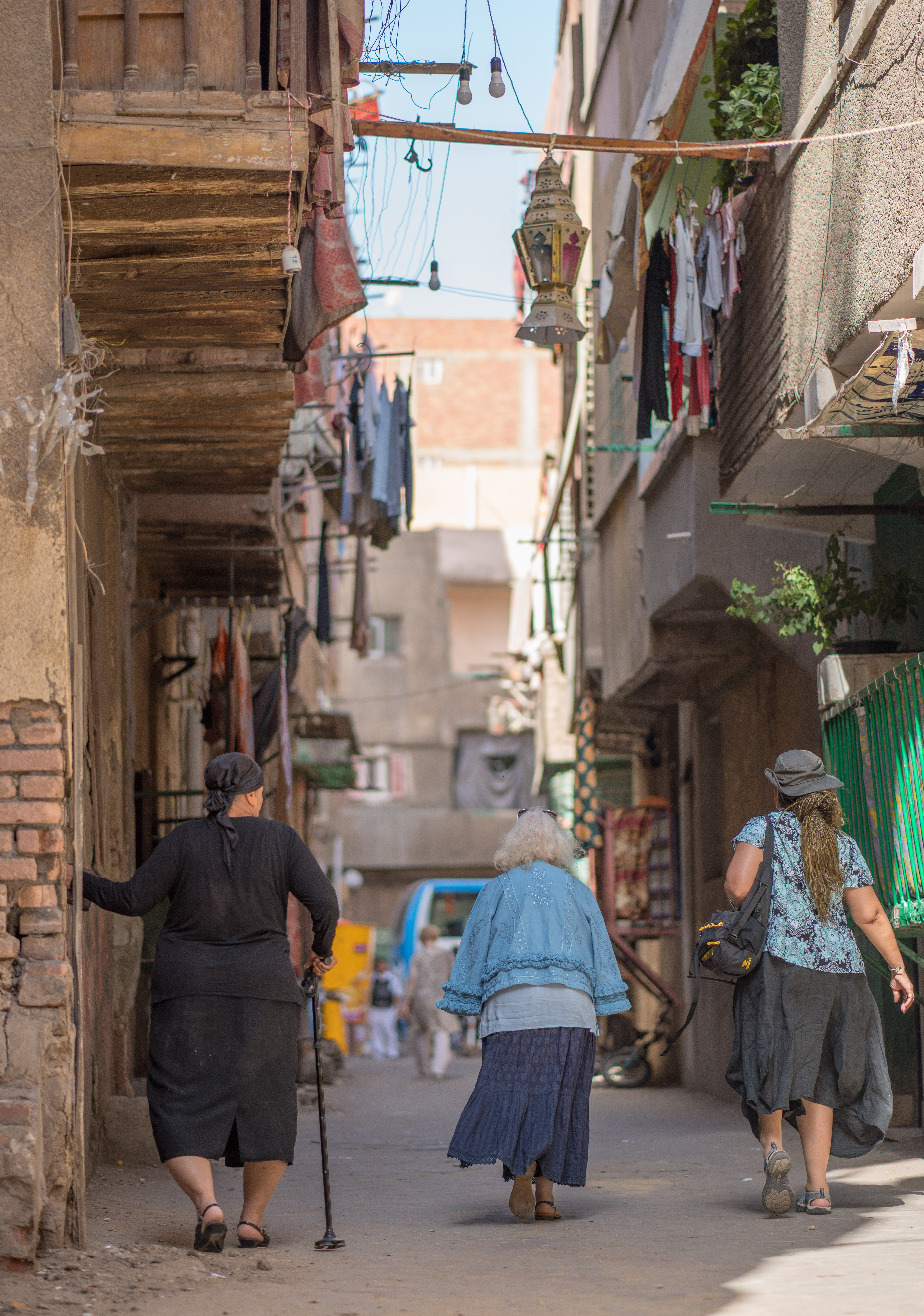 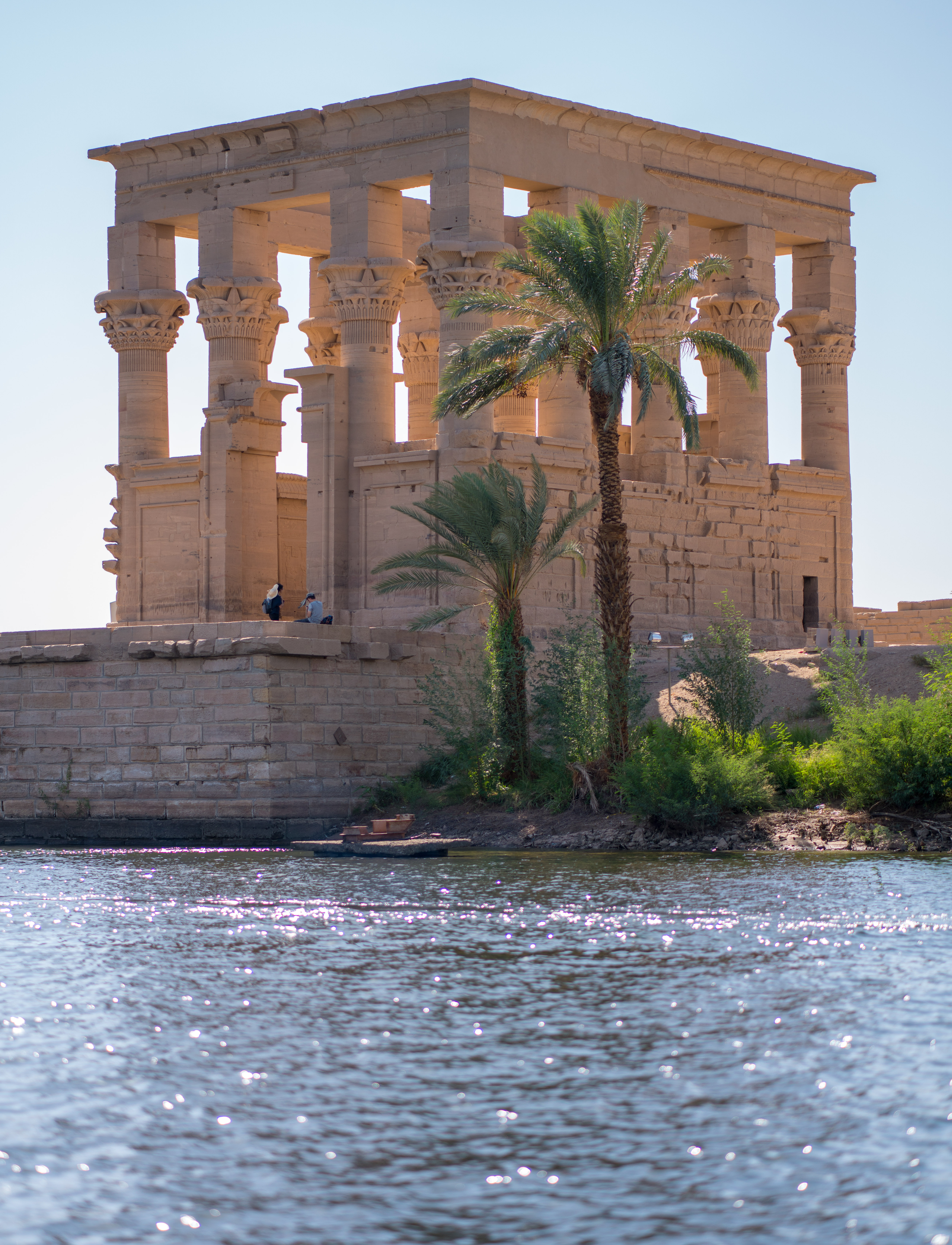 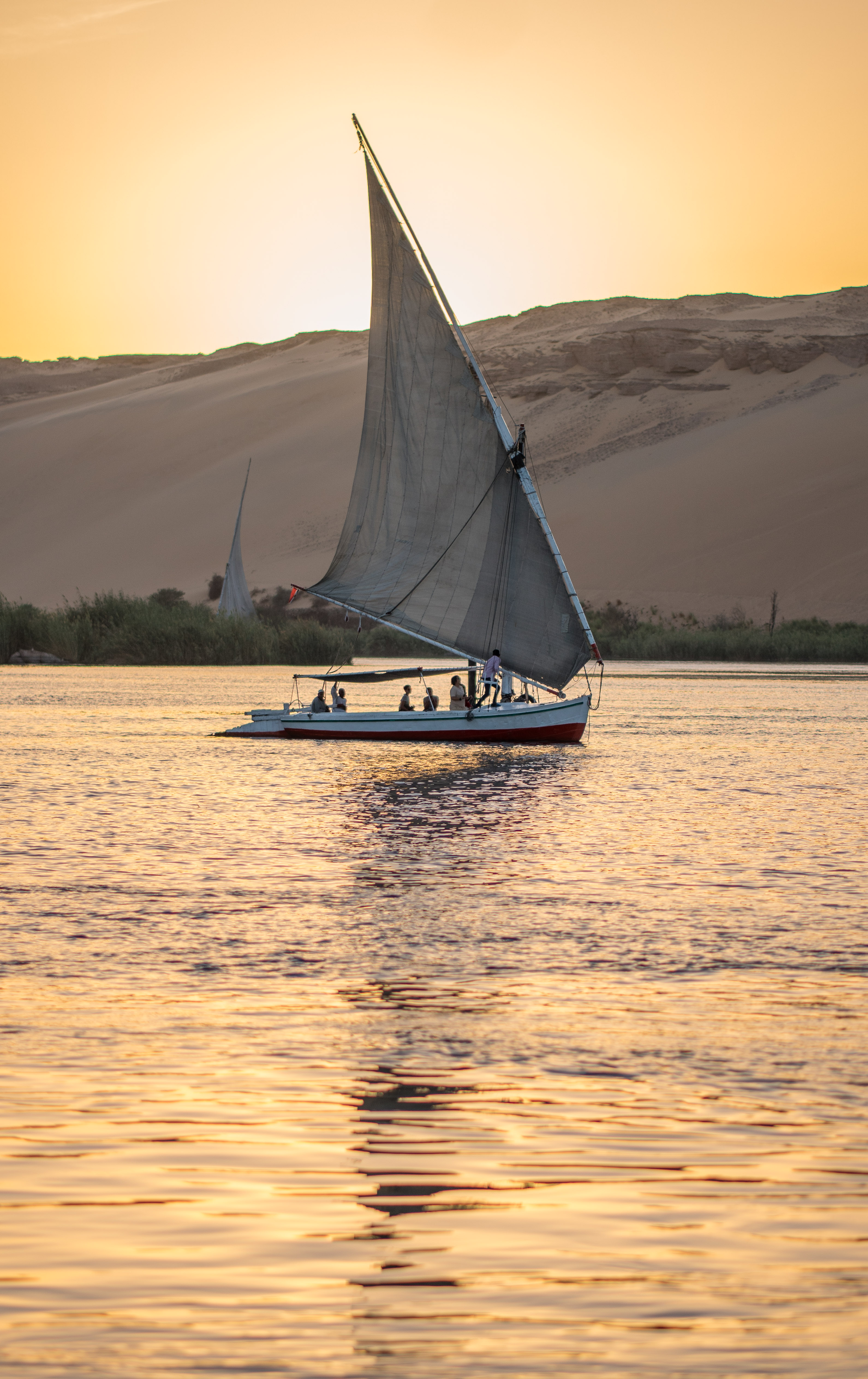 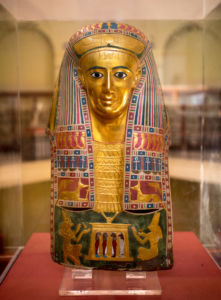 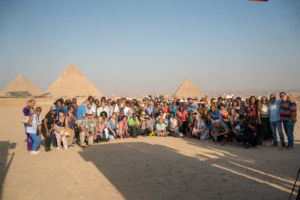 Tours for the day included visiting the Egyptian Museum where everyone was fascinated by mummies and tombs, and the golden mask of King Tut’s sarcophagus. A particular point of interest was the tour guide who discussed Joseph and his impact on Egypt. Egyptians credit Joseph for saving the whole region, not just Egypt, from famine.

Some of the tourists also visited the city of Memphis, which was the first capital of Egypt. While in the area, they saw Saqqara, where the oldest pyramid, the Pyramid of Djoser still stands. That pyramid was built around 2600 B.C., and due to its age, Jesus, Moses, Joseph, and Abraham could have possibly seen it as well. 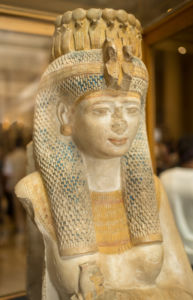 Tours for the day included visiting the Egyptian Museum where everyone was fascinated by mummies and tombs, and the golden mask of King Tut’s sarcophagus.

A particular point of interest was the tour guide who discussed Joseph and his impact on Egypt. Egyptians credit Joseph for saving the whole region, not just Egypt, from famine.  Some of the tourists also visited the city of Memphis, which was the first capital of Egypt. While in the area, they saw Saqqara, where the oldest pyramid, the Pyramid of Djoser still stands. That pyramid was built around 2600 B.C., and due to its age, Jesus, Moses, Joseph, and Abraham could have possibly seen it as well.

On Friday, the group arrived in Cairo and made themselves at home at the Cairo Marriott Hotel, situated on the Nile River. After check-in, folks enjoyed a free afternoon to investigate the area. That evening everyone got together for a welcome dinner where they discussed all the wonderful sights they’ll visit and the events they’ll participate in. The group was excited about the amazing tour they have before them. 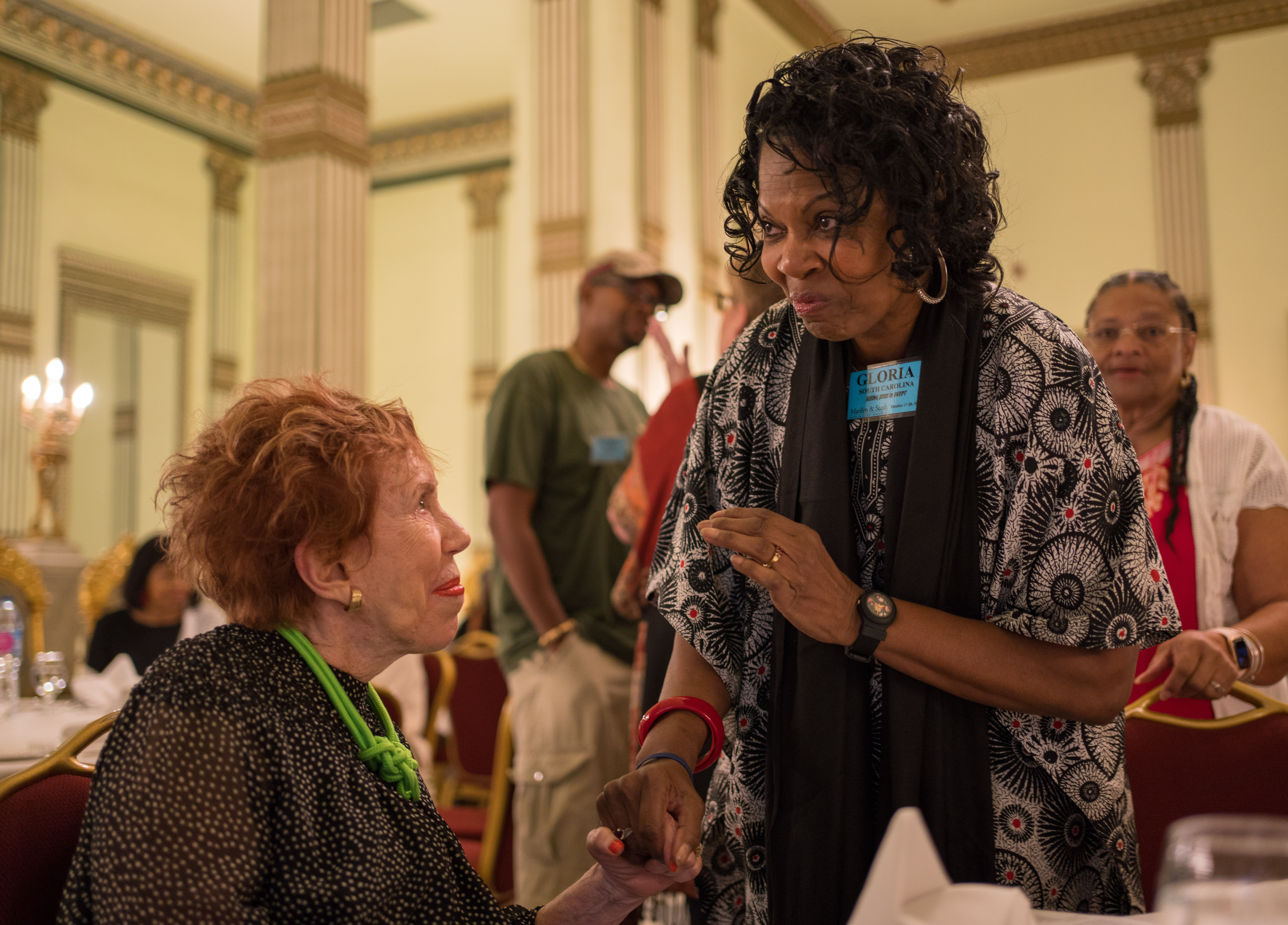 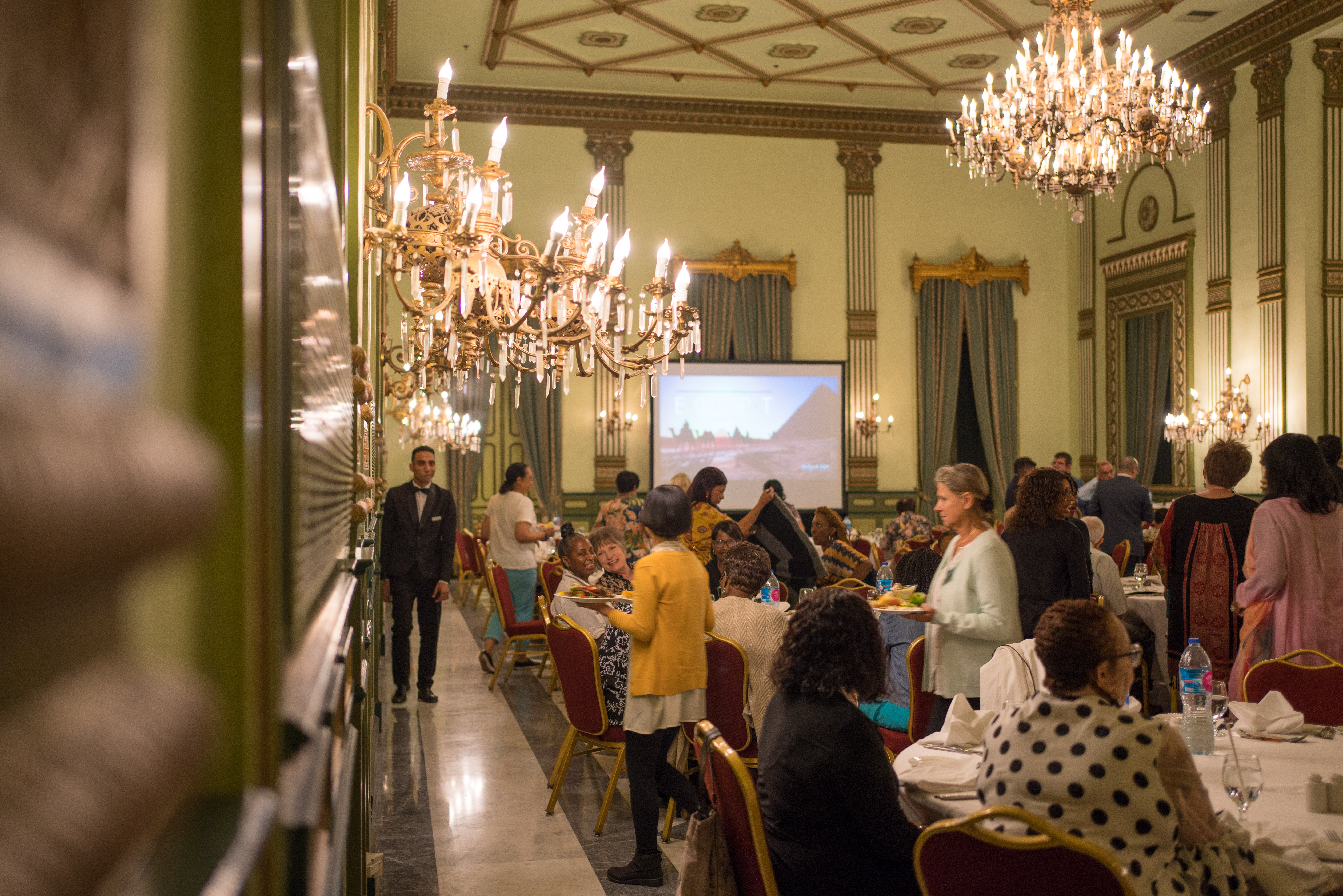 The eager travelers have packed and are ready for an adventure. Some are looking forward to connecting with old friends, and everyone is excited to meet new ones.

Some of the sights they’ll see their first few days are the Pyramids of Giza, the Temple of Luxor, and the city of Alexandria. In addition to all the tourist attractions, the group looks forward to teachings from Marilyn and Sarah, worship times, and prayer walking. 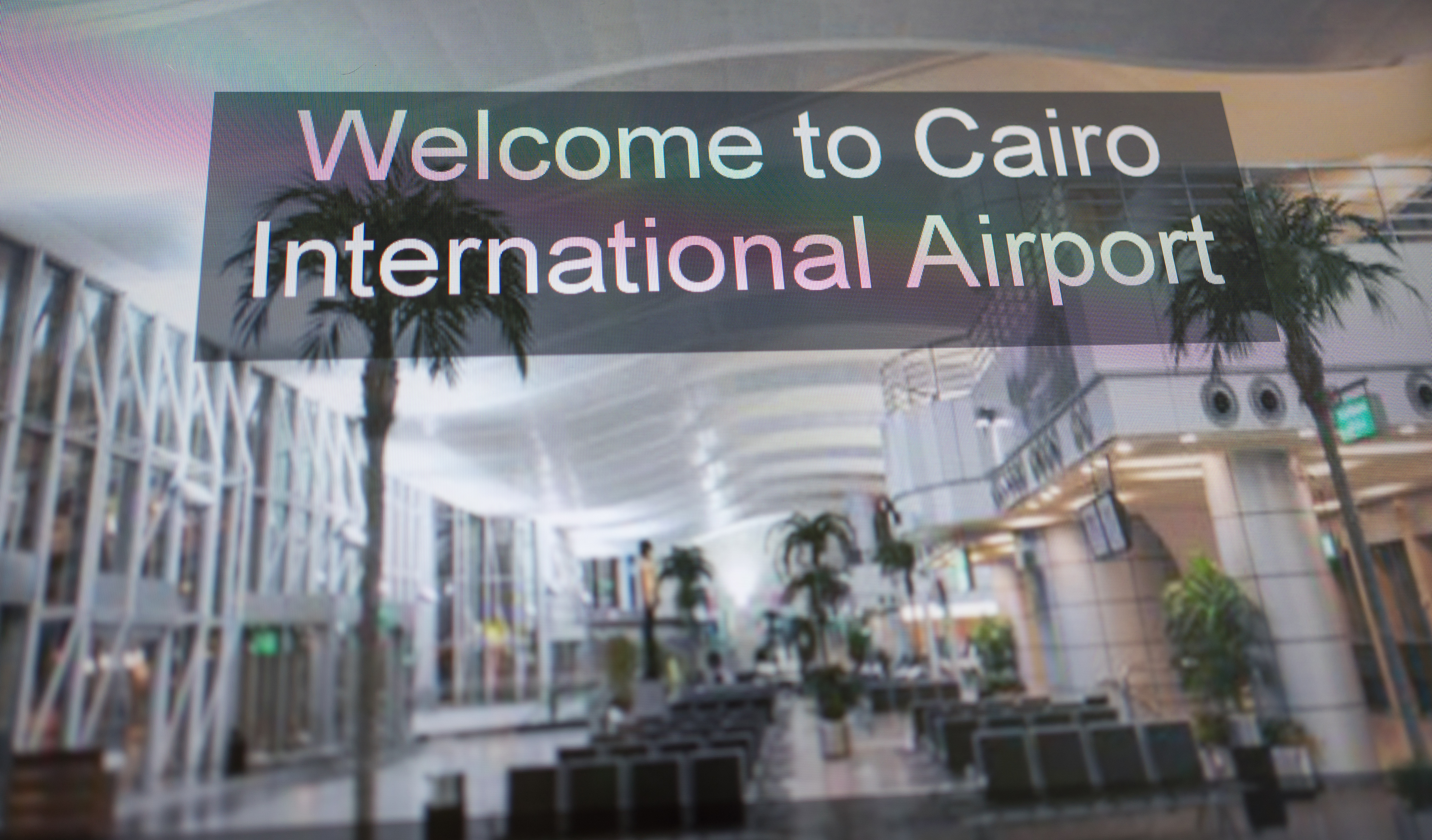 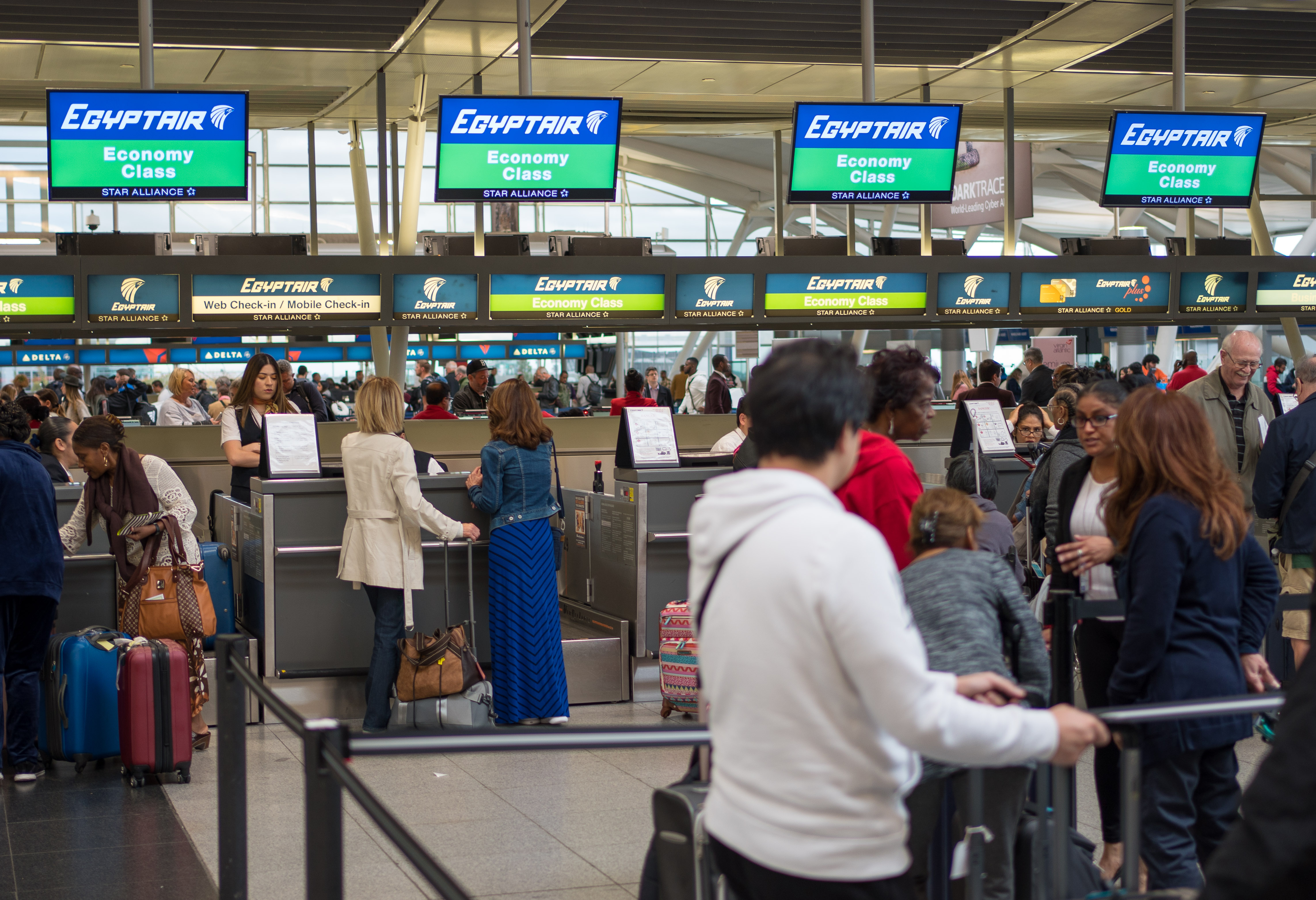